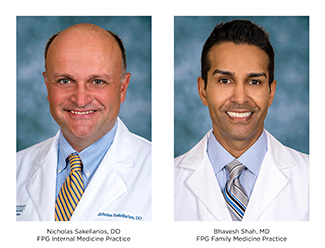 Nicholas Sakellarios, DO, and Bhavesh Shah, MD, are accepting new patients in the Waldemere Medical Plaza. To schedule an appointment, please call 941-917-3500.

Board certified in internal medicine and fluent in three languages, Dr. Sakellarios will provide primary care for adult patients and disease management for a wide variety of conditions (including Alzheimer’s disease, arthritis, diabetes and hypertension), as well as assistance with lifestyle changes, such as weight loss and smoking cessation. He joins FPG from New York, where he served as a partner physician at West Carver Medical and an emergency room physician with the U.S. Department of Veteran Affairs. He received his medical degree from New York College of Osteopathic Medicine in 2009 and completed his internal medicine residency at Stony Brook University in 2012. Dr. Sakellarios is fluent in Spanish, French and Greek.

Board certified in family medicine, Dr. Shah will also provide primary care for adult patients. His practice focus includes treatment of asthma, diabetes, heart disease, arthritis, osteoporosis and tendinitis, as well as providing patients with routine physicals, flu shots and other immunizations. Dr. Shah joins FPG from Chicago’s Northwestern Medicine, where he was a staff physician. Prior to that he was in private practice for more than 10 years and also served as medical director for Hospice. He earned his medical degree from University of Missouri’s Kansas City School of Medicine in 1997 and completed his residency in Family Medicine in 2000 at Northwestern-affiliated St. Joseph Hospital in Chicago. 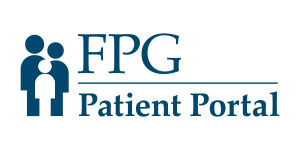